Patterns for Value from Data 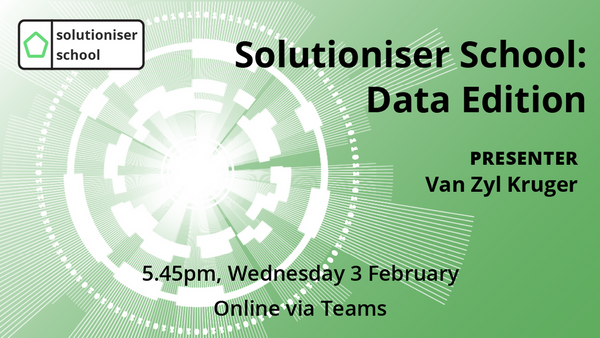 We’ve justed wrapped up another Perth Solutioniser School Meetup. The objective of tonight’s ‘Data Edition’ was to discuss key architecture patterns for realising value from enterprise data. Favouring breadth over depth, we covered these patterns as best as possible within the limited time. Thanks to Van Zyl Kruger for presenting and sharing his insights on implementing these patterns in enterprises from a variety of industries. Thanks also to the attendees for their participation. We doubled attendance from the last session!

Given that Van Zyl’s presentation was periodically interrupted (to the benefit of the session) by a steady flow of questions, it is difficult to give a structured account of proceedings. However, points of note include:

We had a great turn-out for the inaugural Perth Solutioniser School Meetup. I took the opportunity to present high-altitude look...

![](/assets/images/events/sol-school-meetup-20210414.jpeg) Thanks to the Perth Architecture Community for another opportunity to present at the [Perth Solutioniser School Meetup][Meetup]{:target="_blank"}. I had...

Powered by Jekyll; inspired by jekyll-swiss.